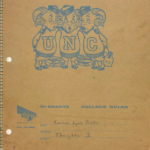 Excerpt Description: Karen Parker, the first Black woman to graduate from the University, explains how she viewed her enrollment at UNC-Chapel Hill as a responsibility to incoming Black students. She also recounts an event during in which she was harassed by white male students while on the campus.

Excerpt Transcript: “Those first students had a bad time, but you had to stay there, because somebody had to be the first. And my mother would always say, ‘Behave yourself, or they won’t let any more of us in,’ and I was always reminded that my behavior affected the people who came behind me. But I feel good when I go to BAR [Black Alumni Reunion] and go to the banquet or something and look at all those professionals and all the successful people who graduated from UNC since I was there, and that’s what it was all about, and that feels so good. It was worth going through all the nonsense and the pain and the humiliation for those students to come along and, however many years later, things loosen up, and for them to excel and have productive lives out of school. I think the worst thing that happened to me–. I was walking across the men’s quad to journalism school like I always did every day, and it was a nice, sunny day, and there was nobody walking across there but me. It was totally empty, unusually empty, except for a couple or three guys in a dorm window. And they were clearly drunk, and they started calling out things to me. And they were racial, and they were sexual, and they were awful, awful, awful. And the only thing I could do was pretend like I didn’t hear them. Of course, I heard them. There was nobody around but me and them, and they weren’t that far away. I heard them, and I knew that if I responded in any way it would just make it worse. And they were talking to me like I was a prostitute or something. I mean, it was awful. Just because of the color of my skin, you think you can talk to me that way? Yeah, how awful. And that was very, very upsetting.”