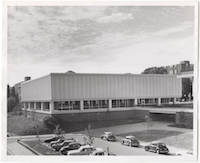 In November 2015, a coalition of student activist organizations, including members of the Real Silent Sam Coalition delivered “A Collective Response to Anti-Blackness” to the University’s administration. The students’ fifty demands included several relating to the “financial ties.” Citing the history of privatization of institutional resources, the students wrote, “We DEMAND that the University NOT privatize UNC Student Stores, whether with Follett Corporation or another group. We stand with the workers who have given years of service to the campus and have demanded UNC reevaluate its push for privatization.​” In 2016, Student Stores was privatized by Barnes & Noble College. The building’s namesake, Josephus Daniels, played a crucial role in the white supremacist campaigns of the turn of the twentieth century during his tenure as editor of the Raleigh News & Observer.