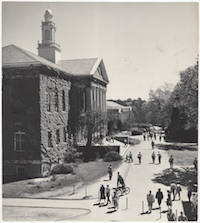 Manning Hall, the original site of the University’s law school, served during the first Foodworkers’ Strike in 1969 as a social counter-space and place of respite for the strikers and their supporters from the picket lines and violence from police. In the front lobby of the building, the foodworkers organized an alternative “soul cafeteria,” serving fried chicken and french fries to the boycotters of the dining halls in exchange for contributions to the strike.