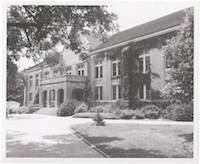 Beginning in 1995, Yonni Chapman began to compile the histories of numerous spaces around the campus to explore “the celebration of slavery, the Confederacy, and white supremacy that is embodied in the names of university buildings and its most prominent public monument, ‘Silent Sam.'” One of these spaces, Swain Hall, is named for David Lowry Swain, Governor of North Carolina and President of the University. Swain, “owned thirty two slaves,” and “led the North Carolina Constitutional Convention of 1835 that disenfranchised free black citizens.”