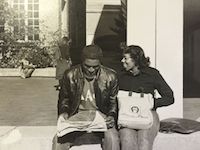 The wall in front of Greenlaw Hall facing the Undergraduate Library became an informal gathering space for Black students beginning in the 1970s. Black students through the 2010s report using the Greenlaw Wall as a gathering space. Mars Earle, a member of the Real Silent Sam Coalition, remembered that they and their friends called the Greenlaw Wall, “the gargoyle,” which “became like a really funny spot of–you would sit and then your friend would walk by and you’d stop and talk and then their friend will walk by and it was just like a place where you could really see, oh yeah, I don’t necessarily know you that well, but I trust you and I see you. And like when things go down, or even just when you’re walking by you can sit and recognize each other’s humanity for a moment.”