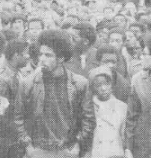 Document Description: During the second Foodworkers’ Strike in December 1969, Black students once again held protests in support of the workers, standing on the picket lines and organizing boycotts of all the dining halls. After Black students from across North Carolina began organizing to convene at the University for a massive demonstration of support for the foodworkers, the University began the work of helping to settle the strike. On Monday, December 15th, approximately 750 Black students from across North Carolina met on campus for a “Black Monday” victory rally, held in front of South Building, the University’s administration building. The powerful showing of support by North Carolina’s Black students for the foodworkers’ demonstrated the importance of Chapel Hill in state-wide movements for racial justice.