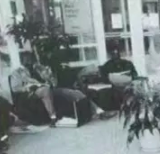 Excerpt Description: Renee Alexander Craft remembers how the Fishbowl space operated and what it looked like.

Excerpt Transcript: “Of course, I’m now talking about it from a space of nostalgia, so I recognize that, but I also recognize things that were true. That Fishbowl, as frustrating as it was that it was so small and you were constantly feeling a sense of surveillance, it was a magical space, and a space I dearly miss now. I am so proud to have the freestanding Sonja Haynes Stone Center, so proud of that. It’s important. But there’s something that we took for granted that we had in the Fishbowl that does not currently exist, which is, again, a space where multiple generations and multiple ranks come together just to be so that you can be in a space—you could come—because it was right across from the little—it’s not the cafeteria area. It was like Alpine Bagel is, but a little bagel shop. You get your lunch, you get your breakfast, and there weren’t a lot of spaces to sit in that area, in the bagel area, so you’d need to be someplace else anyway, and the BCC was right across from it. So you might just want to get your meal or something to drink and have a space —there were a lot of seats. So I want to pause to describe the space and then how the space worked. So it’s a square space, and it had all of these generic—you know the chair pieces that you push together to make a couch? It had a lot of those, so you could move them around a lot. So they were cushy like a couch, but they were really individual chairs. They lined three of the walls. There was a receptionist desk and then the back office, and then the middle of the space, there were the same chairs, but they formed a circle so that the seat part of it was facing out, so it’s like a flower in the middle and then seats lining the side. So you have plenty of spaces to sit and plenty of floor space if you just want to plop down. Even if you didn’t come in for a meeting, you just came in to eat something, there’s someone’s TA over there having a conversation with their students. There are students talking about politics on campus and what needs to be done. There are students talking about the environment and what needs to be done about that. So there’s all of this energy and movement, and you can fall in and fall out of those conversations as you’re going about your mundane life.”