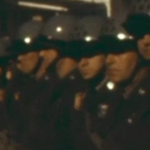 Document Description: On March 6, 1969, ostensibly to keep order on the campus and to reopen Lenoir Hall during the foodworkers strike, sixty state patrolmen, ordered in by Governor Bob Scott and dressed in riot gear, lined the north and south entrances to Lenoir Hall, while picketing continued. This silent video captures the patrolman, the picketers, and the many bystanders who watched the confrontation.