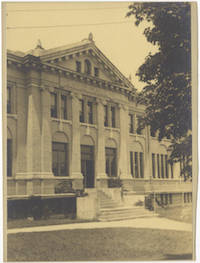 Beginning in 1995, Yonni Chapman began to compile the histories of numerous spaces around the campus to explore “the celebration of slavery, the Confederacy, and white supremacy that is embodied in the names of university buildings and its most prominent public monument, ‘Silent Sam.'” One of these spaces, Davie Hall, is a “classroom building named for General William Richardson Davie, wealthy North Carolina planter and attorney, known as the ‘father of the university.’…By 1790, he owned thirty six slaves.” The current Davie Hall was built in 1967, and its predecessor was built on the same site in 1909.