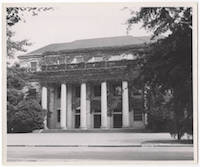 The original Memorial Hall was constructed in 1875 to honor President David Lowry Swain and fallen Confederate alumni. Dozens of marble tablets naming the war’s victims hang on the walls of the building. Though time has obscured the nature of the “memorial” in Memorial Hall, which now serves as the home for Carolina Performing Arts, the building was first constructed to honor Confederate veterans. In 1999, Students Seeking Historical Truth identified Memorial Hall as one of the more problematic buildings on the campus, because it “pulls it [the campus] all together,” by honoring dozens of the state’s antebellum elite and Confederate officers. Memorial Hall has also been the site of over a half dozen protests held on University Day, October 12th, including demonstrations organized by the Black Student Movement in 1976, Black Cultural Center supporters in 1992, the Housekeepers’ Association and their supporters in 1997, and the Real Silent Sam Coalition in 2015.

Space Use: Monument or Memorial